Back in time and again – A small interview with Dan Jurgens

This is a small interview with American comic writer/artist Dan Jurgens, a classic illustrator that was responsible for huge commercial series for the Big Two (Marvel and DC Comics), such as The Death of Superman, Thor and Zero Hour. Now he is back in business writing and drawing the new series of Booster Gold, a timetraveller superhero, inside a big event called Flashpoint.

Octavio Aragão – You are back in the DC Universe with the Flashpoint saga that mark your return to the Booster Gold character. Booster Gold is also appearing in the Smallville series and was a constant presence in the Justice League and Batman The Brave and The Bold animated cartoons. How do you feel about all this exposition and what are your plans for this very particular superhero?

Dan Jurgens – It's great to be back working on Booster Gold. We're part of a much larger DC Comics event and Booster will be playing a major role in it. That seems to fit well since he just appeared on Smallville, which was really a lot of fun. It's great to see Booster get this kind of exposure.

OA – A long time ago you 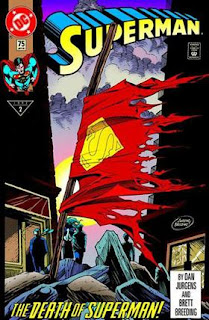 was the brain behind the Zero Hour miniseries, that was a complex timetravel story with lots of retcons and reconstructions of a bunch of classical DC characters (the Hawkman amalgamation was my favorite). Now you are again dealing with timetravel issues and paradoxes in Flashpoint. How does it feel?

DJ – I've always had a love for time travel stories and Zero Hour was obviously a project that used that as a vehicle to tell a big story. And, of course, Booster used time travel to come back in time and be the hero he is today. It's an essential part of his origin, just as much as Krypton is part of Superman's origin.


OA – How do you feel killing Superman? What about being under such a huge media event? Is there anyone else you’d want to kill?

DJ – The Death of Superman story was a major event for comics, something that isn't likely to ever be duplicated again. Yes, we thought we were going to be telling a fun, interesting story, but there was no way any of us expected it to become the media sensation it did. 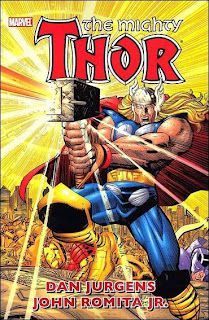 say that your 2003/2005 gig on Marvel’s Thor was a political metaphor about the ways the USA were dealing with the international scenario?

DJ – To a certain extent, yes. It was an exploration of the idea that tremendous, unrestrained power can certainly lead to mistakes being made. Much of what Thor did was the natural course for a god who actually walked the earth and delved into the affairs of mortal man.


OA – You are a rare case of a writer-artist. How do you deal with your deadlines? And how do you work with the other artists when you are mostly writing?

DJ – How do I deal with deadlines? Sometimes, not well! It's a lot of work! Seriously, I truly enjoy this job and have fun writing and drawing. That makes the deadlines easier to deal with. I also enjoy writing for other artists as well. It's great to collaborate with friends.
Postado por Octavio Aragão às 19:15