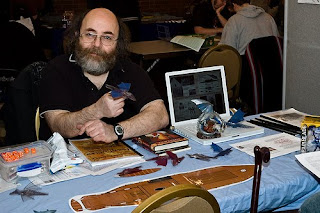 To structure a series of alternate futures for humanity is not an easy task. But our new guest not just built several possibilities but also thought a way to invite you to live this adventures.

With his project Forgotten Futures, every single person in the world can foresse and even pass some time in worlds based in the literary works by Rudyard Kipling or Arthur Connan Doyle.

Now Marcus Rowland talks about this project, the transformations of today’s Science Fiction and even about the health of the game industry.

Carlos Orsi Martinho – As fascinating as the Forgotten Futures sourcebooks are, the fiction collections that go with them – all those airships, Carnacki, weird science vintage tales. How did you first met them?


Marcus Rowland – My first contact was via my father - he was an omnivorous reader and his library included a set of Kipling, some Wells, and some other scientific romances, plus novels and short story collections by later authors including Gerald Kersh. I read them in my teens, then almost forgot about them for about twenty years.

Many years later I was involved in an SF discussion group, run as an evening class, which met once a week for several years. This had several instructors, including the critic and author John Clute, SF historian Brian Stableford, and author Colin Greenland. By then I was involved in gaming and was writing for Space 1889 and Call of Cthulhu, both of which borrowed ideas from this genre. I decided to get back to the original source material and re-read it, and Colin Greenland and Brian Stableford, in particular, were very helpful in pointing me at useful material.

Eventually I decided that I wanted to write my own game, and scientific romances seemed the best source of ideas. I'm not sure I really expected to keep doing it for so many years, but I'm enjoying it and over the years I've raised quite a bit of money for charity. I also began to collect Victorian and Edwardian magazines - I think I own about 80-100 volumes now - and I find the whole period fascinating. The game will never make me rich, and I'm not sure it's even paying for the time and money I invest in it, but it's fun, and leads me to read a lot of interesting material that I might otherwise never have seen.


COM – Your sourcebooks do an excelent job at dismantling the Victorian/Edwardian trappings of the tales they are based on: every convention, cliché and device is exposed and converted into some kind of rule or piece of advice for the gamer. Did you never think of putting it all togheter yourself a posteriori, perhaps composing your own post-modern scientific romance?

MR – I've often thought about it, and may one day try to do something along these lines. But plenty of other people have been there already, and if I start writing fiction again I'd want to be sure that what I was writing was worth reading.


COM – How do you see the changing of science fiction through history? Did the dealing with the scientific romance devices give you any particular insight or opinion about the historical trends and the present state os sf?

MR – This is a difficult question to answer. I'm sometimes worried that a lot of recent material seems to be rehashing old ideas, especially military SF etc.; there seems to be very little worthwhile experimental work being published. Part of this may be that a lot of material is being published on line, but a lot of it is down to the contraction of the publishing industry; I think that they're running scared and afraid to try anything really new. Small presses and self-publication may help a little, but they run into problems with distribution and publicity which means that worthwhile books may be going unnoticed. Apart from that I'm really no expert.


Octavio Aragão – Do you foresee any possible new direction to SF in the future? Would the games industry give any kind of help to save the low sales or it will just transform the SF industry in something more, different?

MR – I think that the pro RPG industry is slowly dying. The average age of players is getting higher, and more and more products are chasing fewer buyers. In the long run I think it's going to be entirely a marginal "industry" with most material only going out on line as PDFs etc. There will probably be exceptions, people still prefer to read printed books, but whether enough people want to read any one game book to make printing it profitable has become a VERY big gamble.


OA – Hollywood finnally discovered Steampunk and Dieselpunk, producing movies more or less successfull like Skycaptain or the new Sherlock Holmes’ franchise. How would a movie based in Forgotten Futures would look like? What’s your favorite scenario and who would you like to be involved in this project?

MR – There was a small chance of this happening, a few years ago. There was some discussion of a Carnacki The Ghost Finder TV series. There are only a few Carnacki stories, and they would need several more to make a series. While they were discussing it one of the people involved, who is a role-player, suggested basing one of the scripts on my adventure Sussex Belle (in FF II), and possibly one of the other adventures, though which one was never decided. In the end the series wasn't made, but for a while it looked possible. Apart from that, the adventures which I think would work well cinematically are: