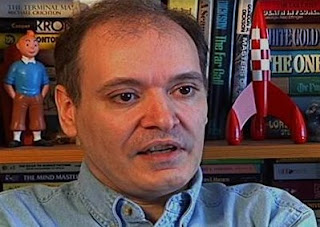 The French writer Jean-Marc Lofficier built alongside his wife, Randy, a very successful career in comics dealing with a wide range of styles, since traditional superhero to Alternate History Science Fiction tales.

Here are some tips about his works and a strange world where all German movies of the 30’s were nothing but the truth...

OA – Ok, Jean-Marc, since this is – probably – your first interview to a Brazilian site, let’s get some personal data... full name, nationality and highlight points of your career.

JML – Actually, I think I gave an interview to another Brazilian site when Via Lettera published TONGUE*LASH a few years ago... Anyway, I'm French, moved to the US, met my wife, Randy, and we've been full-time pros for a while.
We've both have dual citizenship, US and French now. We've done a number of non-fiction books, The Doctor Who Programme Guide, our French SF Encyclopedia, etc., lots of comics, both in the U.S. and in France, and we even wrote some animated television episodes of Ghostbusters, Duck Tales...
We also sold a few movie scripts but nothing was ever produced. You can find a full resume / bibliography on our personal website at http://www.lofficier.com


OA – So, you and Randy are some kind of rarity, with a large amount of works done in the USA comics market and Europe also, breaking the tacit rule that postulate that European artists doesn't sell good in North-America. How did you manage to cross that bridge?

JML – I don't think the Americans think of us (or even me) as a foreigner. I'm just another Amrican with a funny accent! :-)
We live in Los Angeles, we're known in the business, we know the culture and write the language. So we compete on the same equal footing as any other Amerian writer, really. I never really found any discrimination for or against foreign product in America because it is foreign.


OA – Just like other comics related authors, like Neil Gaiman and Peter David, you're also a Science Fiction writer, with a solid work as researcher and some books written about French Steampunk - with a high influence by the work of Philip José Farmer - among other topics. How do you see the world SF market today? Is it suffering a renewal or is stagnant?

JML – Au contraire, I think SF is rather thriving, at leasrt creatively. I do book reviews of SF novels for STARLOG and I'm impressed by the quality of the new authors or first novels I get to read. I wouldn't call it a "renewal" per se, but I don't think science fiction is stagnant at all. At least not in the U.S. In France, it was doing great until about 2001 and then I've had the feeling (but maybe I'm mistaken?) that thinks have dipped somewhat...


OA – Comics artist and scholar Scott McCloud believes in a new Comics Renaissance, thanks to the growing use of the Internet. Do you agree? If so could the same happen to the "genre" literature, such as SF?

JML – Scott is a friend, but I'm afraid I do not agree with him on this topic; I do not see the internet as helping comics at all. Frankly, I don't see the internet helping at all the audio-visual fields (films, tv, music), do you? Even Stephen King tried to publish on the net and bombed. The net is great from promotion, research, discussion, marketing, and to that extent it makes it a lot easier to do things. But it remains the "tail", not the "dog".

OA – Your series TONGUE*LASH are - among other things - a tribute to the work of Moebius and you also wrote some pieces with a clear Jack Kirby flavor. Now you are launching the comic book "Wonder Woman: Blue Amazon", by DC Comics, that mesh the classic character by William Moulton Marston with the 1930's expressionist German movie "Blue Angel". Why so many tributes and citations? Do you believe that the reader of Wonder Woman would want to watch the Marlene Dietrich movie (I'm asking it because I'm a great fan of meshing concepts around... what is Intempol anyway :-))?

JML – To be fair, the homage to Moebius aspect of T*L was more a fact of the artist (Dave Taylor) than ourselves (as writers). Initially, my inspiration came from Tony Hillerman's novel about the Navajo Detective Jim Chee.
Another artist could have drawn T*L and it would owe nothing to Moebius. But you're right -- I do like "world building" -- I like Tolkien, Howard, Frank Herbert, P. J. Farmer, Roger Zelazny, Jack Vance (my favorite author), all great world builders... So our natural inspiration is to create worlds... the neo-Mayan universe of T*L... Transvilane, a concept created by Jack Kirby but never actually shown by him...

As to the German Cinema Elseworld Trilogy (SUPERMAN:METROPOLIS; BATMAN:NOSFERATU & WONDER WOMAN:BLUE ANGEL), it is in many respects interbred just as much to A. C. Clarke's City and the Stars or W. H. Hodgson's The Night Land that it is to German Cinema, although I was fascinated by the coherent world view of German Expressionism... Metropolis, The Cabinet of dr. Caligari, Nosferatu, The Blue Angel and Dr. Mabuse all taking place in the same universe (with a few more left untouched) is an appealing concept, don't you think so? We reread Thea Von Harbou's Metropolis novel and it contains much background information that helped crystallize our view of that future...
Like Alan Moore or Farmer, I think these are our modern myths, worth revisiting, exploring, embellishing, like troubadours used to do with Arthurian romances.

OA – What are your next projects?

JML – Whew -- more Semicverse series in France: PHENIX, DICK DEMON, KABUR...
Several graphic novels: KING KABUR, TIME BRIGADE and a few more in the process of being aproved... A line of books ith Black Coat Press in the US including DOCTOR OMEGA and SHADOWMEN... Next year THE MAN IN GREY, POE ON MARS... we keep busy...:-)