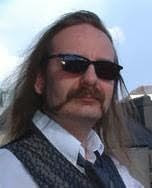 He turned the world upside down creating a reality where Dracula conquered all Britain. Now, Kim Newman talks to us about Alternate Fiction, movies, creative rights, the differences between pop and classical culture and... Brazil!

OCTAVIO ARAGÃO – The amount of known copyrighted characters you use in your fantastic ANNO DRACULA series is astounding, and I know that some of them - such as Fu Manchu and James Bond - are seriously “protected” by their creators and or their legal representatives. How did you manage to deal with them? Have you ever had to face any problem like this?

After all, even Philip José Farmer created new names for Tarzan and Doc Savage when he wanted to write some stories he knew the Burroughs State and Lester Dent’s representatives wouldn’t approve.

KIM NEWMAN – My assumption is that characters are fair game so long as the book doesn't represent itself as cashing in on any franchise – in the case of Anno Dracula, there are several distancing devices like satiric intent, a storyline taking place in another universe (ah, but don't they all?) and the fact that lots of them crowd together and blot each other out. I was aware of some copyright issues, but I only changed one name - James Bond to Hamish Bond - to dodge accusations, and that was because I wanted my version of him to be a major viewpoint character in the book, Dracula Cha Cha Cha; I always planned that a lot of the cameo characters wouldn't be identified by name, to let the reader have some fun working out who they are but that also means the names aren't used. I was also reticent about making much use of characters who are still 'in play' as it were, so as not to tread on any living author's toes - a few writers (F. Paul Wilson, Les Daniels) have been pleased that their characters appear, and no one has seriously complained.


OA – You are the creator and owner of the ANNO DRACULA protagonists Geneviève and Charles Beauregard. You would like to see another author using one of them in his own novel, game or even a fanfic? And since we are at this subject, is there any chance that we ever see AD in other media like movies, games or comics?

KN – This is going to sound hypocritical, but no I wouldn't. I'm not finished with them yet (there's a new story about Charles called 'The Gypsies in the Wood' in an anthology called The Fair Folk, edited by Marvin Kaye, due out soon), and so wouldn't want to let them go. I don't really mind leasing them for tiny cameos (Charles appears briefly in Andy Lane's Doctor Who novel All-Consuming Fire) but wouldn't want to see them used any more extensively. I did come across a poem on the internet called 'Charles Beauregard' which I thought was rather sweet.

The film rights to AD have been optioned a couple of times, and I've even done a script -- it is in option at the moment, but I don't know if there's much movement on it. Other rights tend to go with the film options, so they're tied up now. Over the years, I've had a few comics people say they'd be interested and even an occasional game nibble, but no one has ever come up with a solid deal.


OA – You are a fan of Alternate Reality stories that deal with the invasion of England such as SS-GB, by Len Deighton, and that you see Bram Stoker’s Dracula as a story set in an alternate universe where technology was a little ahead when compared with ours. I agree because I use to think that DRACULA’s ethos is a “warning sign” to a decadent aristocracy in the turn of the XIX Century, a snapshot of the eternal war of religious mysticism against technocracy, where the later is the winner. The concept of a successful Dracula wouldn’t compromise the intentions of the original?

KN – I'm not entirely sure Bram Stoker was aware of all the possible interpretations of his work, which is not to denigrate him as a writer. One of the reasons DRACULA is such an interesting novel is that it's open to all manner of interpretations. Actually, that thing about technology being ahead of ours is just because when Stoker was writing there was no pressure for novelists to give an exact year in which their fiction is set. When the book came out in 1897, he accidentally created an impossible world which has to be before 1890 (because the assembling and presumed publication of the book is part of the plot and there's a seven-years-later epilogue after the bulk of the action) but with many details which don't square with that dating. I just used that as an excuse for altering the timeline a bit more.

Though your reading of the ending of the book is valid, it could also be argued that Dracula, who loves train time-tables and seems eager to embrace modernity, represents a kind of philistine progress and the heroes stand behind their raised crucifixes for spirituality and traditional values. Though Dracula is a Count, he is not British and therefore isn't recognised as a social superior by the English characters, though they do accept a Dutchman and an American into their ranks even as they poke fun at the amusing way they speak English. Stoker was an Anglicised Irishman, so he may have the convert's zeal in celebrating supposed national virtues. OA – We saw what happened to England, America and Italy in your three ANNO DRACULA books. How would be the AD scenario in the rest of the world? Any ideas about it? How a modern vampire community would survive in a tropical country like, for instance, Brazil?

KN – Well, one token Brazilian character appears in Dracula Cha Cha Cha. I've never been to South America so I'd not thought about it much. I assume there'd be wrestling vampires in Mexico. And I've seen vampire movies from Brazil, Chile, Argentina, etc, so tropical vampires are at least conceivable. Plus vampire bats come from South America. So there might be something there.


OA – Seems that today your post-modern concept of AD is turning into a template for a lot of different productions - comes to mind Alan Moore’s LEAGUE OF EXTRAORDINARY GENTLEMEN, the VAN HELSING movie and even the anthology SHADOWS OVER BAKER STREET, where different authors write crossover stories about Sherlock Holmes and the lovecraftian Cthulhu Mythos.

How do you feel about that? Do you think this style of pop fiction that recombine old novels, concepts and ideas in new ones will became a relevant way to produce strong literature (or even a new kind of literary mythology that deals with archetipical characters) or is it just a great unpretentious fun?

KN – I make no claims to have invented this style – Philip José Farmer did it in the 1970s, Howard Waldrop has done a ton of stories and I can think of many, many other precedents from Henry Fielding through Nicholas Meyer to a 1960s Doctor Who serial (The Mind Robber). It may even be getting a bit tired - I worry that we can concentrate too much on the reference-spotting side of the stories while missing the actual point. I always thought it wasn't enough just to have a famous fictional character walk on, take a bow, and leave: there had to be some other reason for invoking him or her, to cast new light on someone we thought we knew or poke fun at them.

Sometimes, it's been almost like casting a play: I've needed, say, a Victorian policeman or a 1950s gigolo and looked around for the possible pre-existing characters, especially if they have an earlier connection with vampire fiction, to take the part. I've done the same thing with real-life people, of whom there are almost as many as borrowed fictional people in the series. I make no great claims for myself about a lasting contribution to literature, but I can cite a few precedents where 'answer' novels and stories are at least worthy of comparison with their inspirations – Henry Fielding's Joseph Andrews is a sequel to and an attack on Samuel Richardson's Pamela (and was so successful that the latter is now somewhat underrated), and I'm a great admirer of Jean Rhys's Wide Sargasso Sea (a spin on Jane Eyre) and Valerie Martin's Mary Reilly (a take on Dr Jekyll and Mr Hyde). I don't mind unpretentious fun either, though I guess what I tend to do would probably get labeled pretentious fun.


OA – Thank you very much, Mr. Newman. And let’s hope that some of your books do appears in Brazil sooner or later.
Postado por Octavio Aragão às 09:35